Hi guys, Here i will discuss with you essential computer terms. I hope it will be very useful for you. Lets start with one of the hot topic of computer i.e. Operating System.
I have realized one thing when i share my knowledge with my friends, we learn lots of computer terms but we cannot recall these when we need. So, Lets start...

The operating system is the most important program that runs on a computer. Every general-purpose computer must have an operating system to run other programs. Operating systems perform basic tasks, such as recognizing input from the keyboard, sending output to the display screen, keeping track of files and directories on the disk, and controlling peripheral devices such as disk drives and printers.

For large systems, the operating system has even greater responsibilities and powers. It is like a traffic cop -- it makes sure that different programs and users running at the same time do not interfere with each other. The operating system is also responsible for security, ensuring that unauthorized users do not access the system.

Operating systems can be classified as follows: 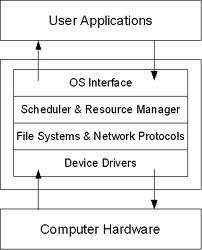 Abbreviated as NOS, an operating system that includes special functions for connecting computers and devices into a local-area network (LAN). Some operating systems, such as UNIX and the Mac OS, have networking functions built in. The term network operating system, however, is generally reserved for software that enhances a basic operating system by adding networking features. Novell Netware, Artisoft's LANtastic, Microsoft Windows Server, and Windows NT are examples of an NOS.

Posted via email from Akshay Dake
Posted by AKSHAY DAKE at 11:13 AM No comments: